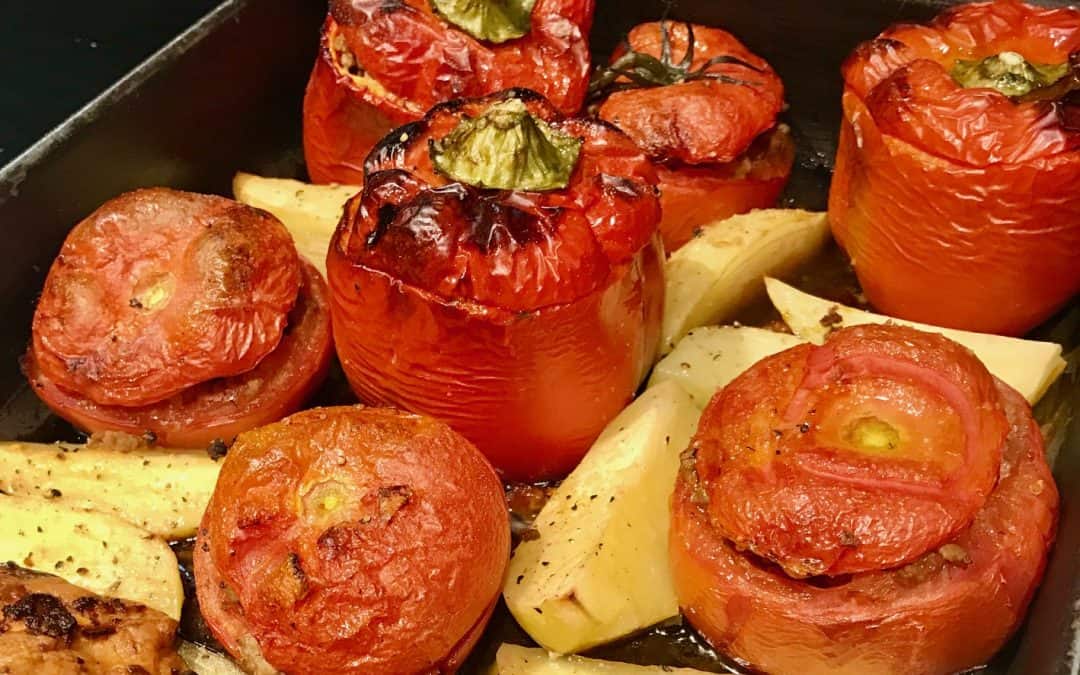 A perennial favourite for visitors to Greece and a dish that everyone seems to love is Yemista – Greek stuffed vegetables.

There are many variations of this dish and it is one of the best Greek dishes for vegetarians and vegans as it can easily be made without mince.

Yemista actually originates from the Dolma family, the same group of recipes that includes stuffed vine leaves or ‘Dolmades’.

There are also variations found throughout the Balkans and the Middle East and even other parts of the world such as Spain and Mexico. It is believed they were introduced to Greece through Asia-minor like so many other dishes.

In Greece tomatoes and bell peppers ( or capsicum) are probably the most commonly used although it is not unusual to see eggplant, zucchini, and squash used as well.

The verb ‘gemizo’ or ‘yemizo’ literally means stuffed. They are typically stuffed with a rice and herb mixture but this can vary from place to place and kitchen to kitchen.

To make them suitable for vegetarians and vegans simply omit the minced meat.

A classic dish using summer vegetables stuffed with a rice mixture and baked in the oven. Usually made with tomatoes and peppers ( capsicum) but also eggplant and zucchini. Leave the meat out for a perfect vegetarian/vegan option.

Usually served at room temperature rather than straight out of the oven and even better the day after they are made.

The best Souzoukakia recipe : how to make Greek meatballs in tomato sauce

This is my favourite Souzoukakia recipe. These delicious meatballs in a rich tomato sauce are great year-round but especially on cold nights when comfort casseroles are so satisfying. This dish was originally from Smyrna ( now Izmir) in Turkey, hence the inclusion of...

END_OF_DOCUMENT_TOKEN_TO_BE_REPLACED

This dish is a firm family favourite in our house, especially in winter. It's so simple and easy to make and with every food group represented it is highly nutritious, which makes it the perfect comfort food. This authentic Greek avgolemono soup recipe will be a...

END_OF_DOCUMENT_TOKEN_TO_BE_REPLACED

This is probably the most popular dish in our house and is a speciality of my husband John who really enjoys making it. He sends off photos of his work to his Greek friends in an ongoing competition that spans the globe. This is his Greek 'lasagna' recipe and it's...