Follow in the footsteps of Odysseus: Visit the island of Ithaca, Greece 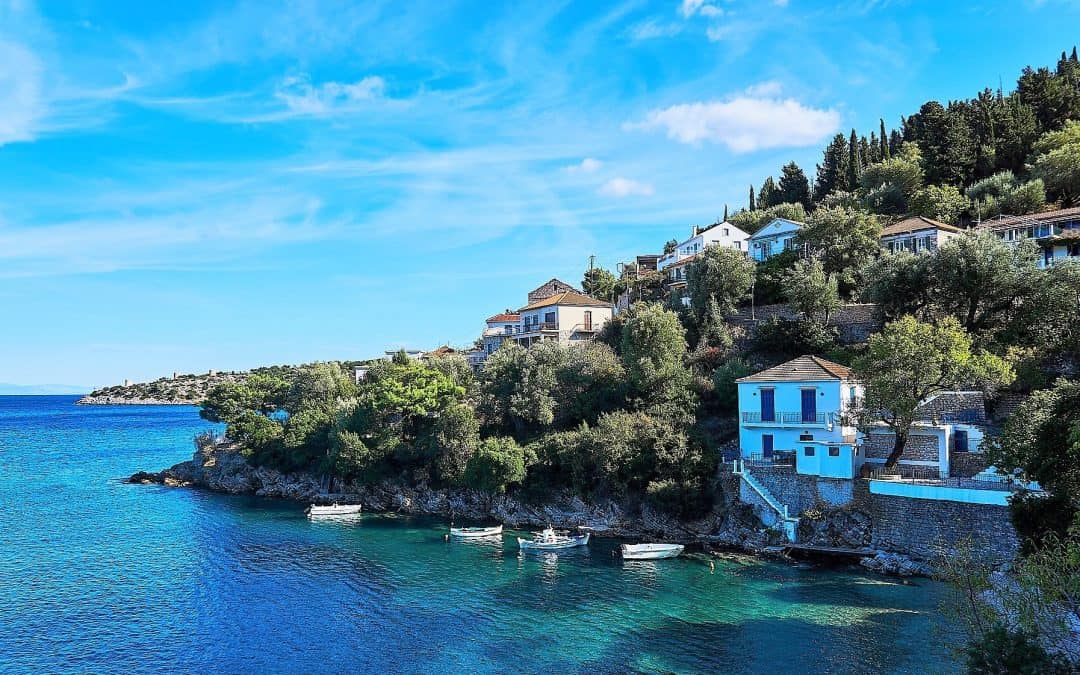 In Homer’s The Odyssey the Trojan War hero, Odysseus, must face a 10-year battle to return to his beloved wife Penelope at his Kingdom, the Ionian island of Ithaca, Greece.

Sailing into the port town of Vathy you can’t help but think about what it must have been like for Odysseus to see his homeland again after 20 extraordinary years away. Certainly, the verdant green hills spilling down into the azure waters is a sight to behold!

Today Ithaca is a much smaller and quieter version of its close neighbor, Kefalonia, and is an authentic example of a Greek Island that has managed to strike a perfect balance with seasonal tourism.

It is easy to see why Odysseus found peace on this island and a holiday in Ithaca will likely leave you feeling relaxed and yearning to stake out a place of your own.

Note: This article may contain affiliate links. This means any booking made by you via a link creates a small commission that helps pay for the running costs of this site, at no further cost to you.

For more advice and information from even more travellers be sure to join our Facebook Group.

When to visit Ithaca

The best times to visit Ithaca is April to September. High season is late June to early September, and prices will reflect that as will accommodation availability.

Summer is great in Ithaca. The water is warm, there are blue skies every day and a fun holiday atmosphere. It doesn’t get as busy as many of the other islands and retains a chilled, laid back vibe.

Ithaca is located in the Ionian islands in the far western part of Greece.

It is very close to Kefalonia and south of Lefkada.

How to get to Ithaca,Greece

There is no airport on Ithaca so the only way you can get there is by ferry.

There are ferries to Ithaca from Greece mainland, Kefalonia and Lefkada. The closest airport to Ithaca is on Kefalonia island and it is connected with Ithaca by ferry.

Ferries run daily from Sami on the eastern side of Kefalonia to Pisaetos on the /SouthWestern side of Ithaca. There is a local bus that then runs to Vathy.

If you want to see more of Ithaca it would be better to rent a car and take it over, or you can hire one in Vathy.

There are also day trips to Ithaca from Fiscardo at the northern tip of Kefalonia. It’s a great day out with lots of swims and fun for all ages. Group Day trips are also on offer from Agia Effimia during Summer as are private sailing cruises.

Ferries depart from Killini in the Pelopponese ( a popular port for visitors to Olympia) and also from Astakos on the western mainland.

There is a regular ferry service between Kallithea on Lefkada island and Vathy.

Trying to fit it all in?

Pressed for time and overwhelmed with information?

This 7 day sailing tour for up to 8 people starts in Lefkada and stops in Ithaca, Fiskardo & Sami (Kefalonia), and the islands of Kalamos and Meganisi!

Where to stay on Ithaca

Most accommodation on Ithaca is in the main town of Vathy.

Vathy is also the capital and was entirely rebuilt after the earthquake of 1953 so it has a sense of order and planning that is often missing from many Mediterranean destinations. The buildings are all painted yellow, pink and cream and it wraps around a sheltered bay with the deepest blue water.

There is little traffic and during the day you would be forgiven for thinking the place has been abandoned. That all changes at night as the locals come out for dinner and coffee and perhaps some music too.

Cavos Seaside House is a lovely 2 bedroom house 5-minute walk from Dexa Beach and is right on the seafront.

Perantzada Art Hotel is also in the port and is housed in a 19th-century neoclassical building that is beautifully decorated. It also has a swimming pool.

Kioni apartments in Kioni are well appointed and have lovely views over the harbour.

Nostos Hotel in Frikes is popular and has a nice pool while Cavos Sunset view cottages have incredible sunset views and are close to Dona Lefki ( see Dinner).

There are also some excellent Airbnb’s available for rentals of up to a month.

Where to eat in Ithaca

Some of the best tavernas in Ithaca are in Vathy and many of them are on the water around the harbour. It’s a great spot to sit and watch the boats coming and going and you can join the local men at the various Cafenions as well.

Kantouni serve very traditional meals with a smile and is always full of locals as is O Batsis a little further along.

In Kioni our pick is Lizzy’s with it’s beautiful setting overlooking the sailing boats and Ageri is similar in Frikes. Stop at Chani when heading out of Vathy for great food with incredible views.

Kanenas in Stavros is considered one of the best taverna’s in Ithaca. Some say the whole of the Ionian islands!

Lizzy’s in Kioni again and Dona Lefki is on the west side of the island so gets amazing sunsets as well as excellent mediterranean food with a modern spin. This was probably our favourite meal of all.

If you’re up for a bit of a walk then Soulatso is right around on the eastern side of the harbour and gets quite lively late at night.

Otherwise Rozes is both an excellent cafe and a great bar that plays good music with a cool vibe late at night.

Things to do on Ithaca,Greece

Towns and villages of Ithaca

The villages of Ithaca are quaint and authentic and many of the old buildings have been well preserved. In Vathy there are building restrictions that prohibit the use of modern designs and limit the colors that can be used which has helped preserve its integrity.

Vathy is the capital and main port of the island.

It has been the capital of Ithaca since the year 1500 and has a population of around 1700 people.

It is home to most of the tavernas, cafes and shops and has a vibrant atmosphere at night.

Points of interest in Vathy include:

Built on the slopes of a mountain and it has a lovely port, where fishing boats moor quietly. Located 24km’s from Vathy it is one of the prettiest villages in the Ionian group.

The entrance to Kioni is past 3 old windmills and many of the houses were built in the 16th century and survived the earthquakes. There are several quaint churches in the villages and very good beaches in the vicinity.

Frikes is a small seaside village on the northern side of Ithaca that is connected to Lefkada and Kefalonia by ferry. It is 19km from Vathy.

This pretty town has 2 traditional windmills and several beautiful beaches.

A picturesque village on the northern side of Ithaca with traditional architecture and lovely sea views, Stavros is the 2nd largest village on Ithaca island and is 16km’s from Vathy. It was built in the 16th century and it is believed that the Palace of Odysseus may have been situated here.

There is a small but interesting museum with artifacts from the Caves and the School of Homer as well as Neolithic and Mycenaean pottery.

Things to do on Ithaca cont/

With a reasonably sized coastline, there are some gorgeous sandy beaches on Ithaca. The water is truly some of the clearest I have seen anywhere in the world.

The best beaches include:

Things to do on Ithaca cont/

Unsurprisingly many visitors to Ithaca seek out the places that are mentioned in the Odyssey and the tales of Odysseus.

People first arrived on Ithaca during the Neolithic Age. There are a number of archaeological sites on the island to explore.

There is an archaeological site to the right of the highest point of the main road from Aetos to Piso Aetos. From the church of St. George there is a steep path that leads visitors to the top of the hill and the ruins of “Acropolis of Alalkomenes” or “Castle of Odysseus”).

From here you can enjoy the spectacular views of North Ithaca, the Western side of Kefalonia, and all of the East Coast.

Another popular trek in Ithaca, Greece. The starting point for this track is the old Panaghia’s church, above the cemetery, at the top of Perachori village.

When you reach the second bend in the path in Paleochora, you will be in the center of the original medieval town with great views out over Dexa Cove.

Follow the path downhill past two small churches until you arrive at Nymphs Cave (Marmarospilia).

Is there another dish that screams GREEK ISLANDS more than Greek Salad? Visions of seaside tavernas, fresh seafood, and cold beer are the natural accompaniments to this dish, so here is our recipe for Greek Horiatiki salad for you to recreate in your slice of...

END_OF_DOCUMENT_TOKEN_TO_BE_REPLACED

Spanakopita is one of the most famous Greek dishes and is easy to make. Often called Spinach and Cheese pie and a great vegetarian Greek dish this feta cheese pie recipe will be an instant family favourite. This dish is one of Greece's best known and is a family...

END_OF_DOCUMENT_TOKEN_TO_BE_REPLACED

3 days in Santorini you will never forget!

Crowded, expensive and completely unforgettable. Santorini is one of those places that despite all the bad things you've heard and read still manages to exceed your expectations. There's nothing like it on the planet and if you are going to Greece, especially for the...

END_OF_DOCUMENT_TOKEN_TO_BE_REPLACED

When is the best time to visit Greece ?

There's never a bad time to visit Europe but when is the best time to visit Greece? Greece has had significant influence across the planet on arts, philosophy, politics, science, and sports. It's also home to stunning beaches, over 200 inhabited islands, ancient...

END_OF_DOCUMENT_TOKEN_TO_BE_REPLACED

See Sifnos – a complete guide to Sifnos hotels, Sifnos beaches and much more!

Never heard of the island of Sifnos? Well, you’re not alone - but I’m pleased to bring you in on this wonderful secret. Part of the Cyclades islands, Sifnos’ immense beauty defies its modest reputation. A week or two at one of the charming Sifnos hotels or villas will...

END_OF_DOCUMENT_TOKEN_TO_BE_REPLACED

Holidays in Hydra – a complete guide to the birthplace of Bohemia

Hydra is an enchanting island that is quite unique compared to other Greek islands in a number of ways. One of these is that there are no cars or scooters allowed which makes it quiet tranquil and feels like time has stood still in many respects. Horses, donkeys, and...